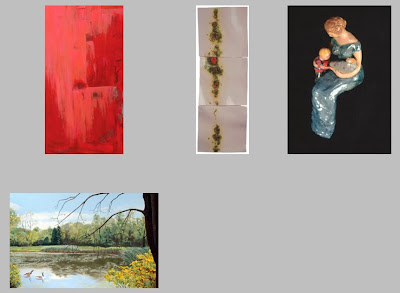 For her first Solo Exhibition Julienne Johnson presents a powerfully poetic body of work in a visceral, yet painterly language all her own. Working an Abstract Non - representational format, Johnson leads us through a complicated, dangerously vulnerable drama on canvas. Acting out each scene with emotionally charged, often hand mixed color pigments and symbolic references - we follow her down a path of angst and honesty as we try to put our own feelings in order.

After a successful career in architectural design, Sue Keane began working in clay, and one can see her work is still strongly influenced by the geometry of architecture and how forms relate to their surrounding space. Surface textures play an important part in the visual attraction of each piece as does light and shadow and types of glaze used. The fine detail of her work requires close examination of both surface texture and form.

In 'La Famiglia', sculpturist Patricia Doede Klowden continues her exploration of the notion of place and identity as it functions in the modern world. Her newest bronze figures represent a transitional shift from the more androgynous communication of humanity seen in her previous series, 'The Bronze Age'. Here, recognizably female figures express the power of cultural origins and physical strength through attenuated form and subtle detailing. Klowden then moves to her most personal exploration of identity yet: her own family. In ceramic, she touches upon the forms and personality of her grandchildren, trading the universal cast of her earlier bronzes for the more personal markings of family.

In her latest exhibition, "Return to Nature," Ellen Starr explores the endless possibilities of subject matter presented to us in the natural world. She explains, "I am attracted to complexity, perhaps because I'm an inveterate organizer. I like to find logic in disorder; to see beauty in the intricate; to make confusion understandable. I strive to balance form against form; color against color; and light against dark. My ultimate goal is to achieve a stable whole out of many parts to create a sense of equilibrium and serenity."
Posted by TAG Gallery at 9:25 AM