Mixing humour and noir, Katie Crown’s figurative paintings darken the sunny, saturated sea-sides of Southern California. Both her oil paintings and ceramic sculptures are characterized by a play on geometric patterns and the pathos of the human condition. Her pieces might seem the California love child of Mondrian and Alice Neel, capturing an isolated, voyeuristic beach culture, culminating in a Dis-United States of America. Crown navigates the familiar beaches of Southern California where fun in the sun actually reveals a complex and dark and entertaining social dance.


In Ernie Marjoram’s latest show, Guilty Pleasures at TAG Gallery, the Los Angeles based oil painter monumentalizes our soothing psychological yet "not-so-healthy" dishes, and examines the moment just before we bite. We zoom in on the foods we take for granted, and discover their personas, temperaments and tastes through the thick impastos of pasta, pot roasts, and yes, even cheeseburgers. We enter the landscape of our own anxieties, taking stock of the thick, fun and exuberant dishes that give us comfort in our times of emotional malaise.


As if dioramas from the story of Coelho’s Alchemist, the works of Juan Rosenfeldt transform found objects of earthly time into contained experiences of eternal aesthetic contemplation. In the Elements of Change at TAG Gallery, the Venezuelan-born Rosenfeldt creates a visual correlation to Borges’ Magical Realism suffused with the surrealism of Meret Oppenheim, and Joseph Cornell. In examining the delicate balances of computer parts, butterflies, stamps and string, we discover the fragile nature of our existence and the sheer wonder of it’s fruition.

Posted by TAG Gallery at 8:41 AM No comments: 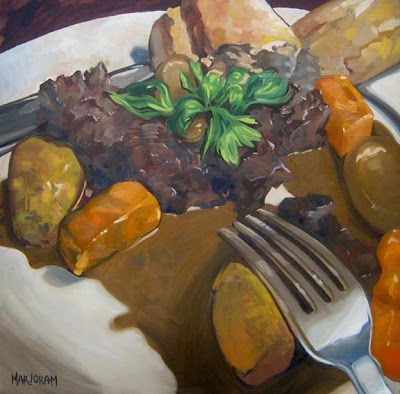 From small to monumental, is there a scale that you prefer to work in?


For my plein-aire travel paintings, the canvases have to fit in a suitcase so they are no larger than 16" x 20". In my upcoming show at TAG gallery, I will be exhibiting large-scale still lifes of food which requires bigger canvases.
Most of the works in this exhibition are 30" by 40" and have been painted in the comfort of my studio.

How often do you start a new work?


I tend to put off everything to the last possible moment, my painting included. It isn't until the exhibition deadline approaches that I finally get down to creating the art. It drives my wife crazy!


To the eye, my paintings are representational so the color choices are based on reality. A pickle needs to appear green. However beneath the surface, the paintings are abstract compositions of lines and shapes and the green pickle is a combination of red, yellow and blue pigments.


I strive for visual harmony in work. While a painting is on my easel, I often step back, look for distracting elements then return to the easel and eliminate them. When I step back and can find no visual distractions, the painting is finished.

Have you learned any new techniques this year, or traveled to any new painting sites? Will you share what they are?


My exhibition this year is a new direction for me. After years of painting small architectural scenes ion exotic locations, I have chosen to paint simple foods in a contemporary way. My new painting site is the studio! 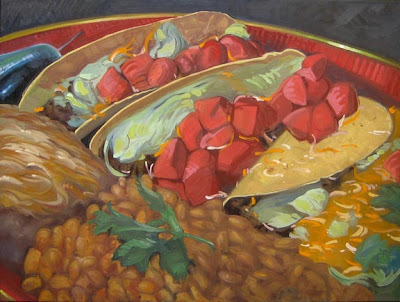 Of all the stories your paintings might tell, which is your favorite?


Hopefully my food paintings will remind people of meals they have shared with others. For example, my grown son and I sometimes meet for dinner at a Mexican restaurant in West Hollywood. I always order the same thing, a combination plate called "Il Vagabondo" on the menu. My painting "Combination Plate" reminds me of our time together and the bond that we share over a simple meal. 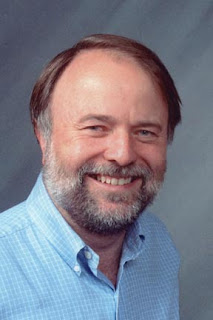 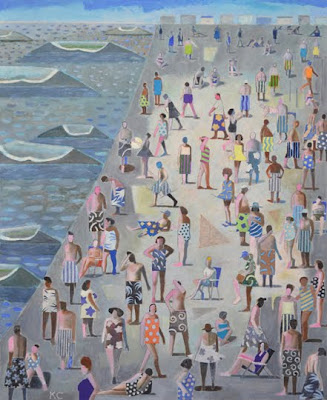 As an artist working in more than one medium, both oil and ceramics, do you find that the two mediums influence each other? If so, in what ways, and how do you decide which to use?

In the instance of my escalator painting series I decided to do the escalator sculpture as well, but it's rare for me to work on the same theme in both media. Sometimes it's my feeling that I can't do justice to some theme in paint, so that I take it up in clay. When a figurative oil painting gets very cartoonish or distorted, then it might resemble a figurative sculpture, but generally I keep them separate. When I'm glazing my ceramic sculptures some of the color sense from my paintings takes hold. I tend to move back and forth between the two media. If a painting has been particularly difficult to finish, then I know it's time to sculpt for a while. Also when all of the processes involved in sculpting clay seem too cumbersome, then I'll get back to painting, which is so much more spontaneous.

Is there a separation between your "normal" life and your artwork? If so, how do you manage to keep each in its place?

My artwork consumes my life. But it is a relief after working 9-5 on my art to be able to quit for a while and focus on something else. 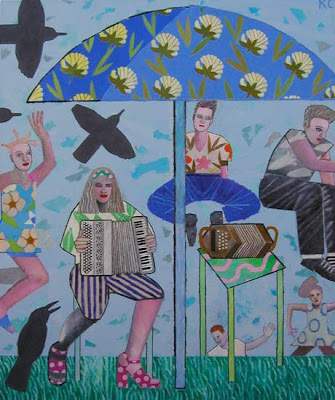 What is your thought process while making a painting?

My paintings tend to be large, so I move in and out of the room where my painting is hanging and work on it that way. I like to be able to get back about 30 feet or more so I can judge what's going on. Then when I have it at a stage I like from afar, I have to work with it up close so that it reads well from near and far. Color is super important to me, so I'm always concentrating on making the color sing.

Are your family and friends supportive of your art?

I only have my younger sister left in my family and I think she's pretty burnt out from having a father who was so obsessed with his artwork. So I tend not to talk art with her. My friends are very supportive of my art. I have a few who like to go on drawing excursions with me. My husband is quite an advocate of my art and helps facilitate some of the needs that my sculptures introduce, like making stands or cutting wooden tables for my cafe scenes.

Do you have a favorite painting? (Yours or somebody else's) ?

It's hard to choose just one. But if I'm including museums in the Los Angeles area, I love the Ensor painting, "Christ Entering Brussels" at the Getty museum. It's hilarious, with lots of loony characters masquerading as saints. For some reason it seems familiar. They also have it hanging with Munch's great painting, "Starry Night". So you have a great comment on humanity hanging with a great comment on nature. 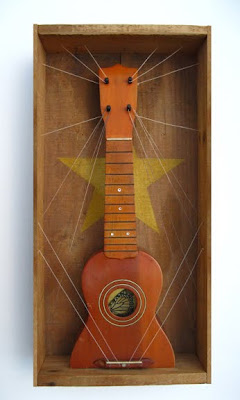 Where did you grow up? Does where you grew up have an influence on your art making today?

I was born and raised in Venezuela; being first generation born American from a northern European family, my influences were strong and contrasted. At home I was influenced by all things from the old world. My father was a big fan of classical music, old engravings and so on. Outside of home it was the opposite, color and rhythm, bright and loud, from a culture of a nation on the tropical caribbean region. Both worlds were prominent and influential, I think this is why I chose later on to live in Spain. It's exactly the mid point geographically between Venezuela and Estonia.

When did you realize that you wanted to be an artist?

I don't recall the when. The creative itch has always been there, since day one.

Does your own life experience play a role in your imagery?

Absolutely, there's no separation. it's like alchemy and the alchemist. I'm my own laboratory, and whatever the current pressing issue, concern or quest, becomes the end result in the art piece. Or the other way around, the creative process assists me in figuring "it" out. 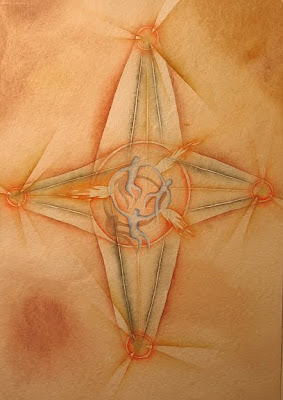 What is the process that you use for your work? Take us through the steps taken that lead to what we see?

It's basically two-fold. A seed idea/vision that expands through sketching, planning and producing. And a random encounter with an object/element that inspires the final artwork. Going to beaches, for example, after a storm, on the Pacific coast, is a treasure throve of driftwood and distressed debris.

A "casting" process between found objects is a big part of my workflow, how disparate objects and ideas come together come together and create a new reality.

What art historical art movement would you choose as identifying most with your work?

If I could narrow down, it would be early to mid 20th century: Gauguin, Klee, Miro, Cornell, Beuys, etc. The art in this particular era was deeply involved in inner-self exploration, along with symbolism as well as drawing from the well of primitive art, from cultures and times where the notion of art didn't even exist.

Posted by TAG Gallery at 8:56 AM No comments: