Joe Kabriel
Inspiration Road
Joe Kabriel’s recent works draw inspiration from the shorelines and canyon roads of Southern California. Varying rock formations play a seminal role in many of Kabriel’s images. As he notes, “Some cultures believe that rocks contain spiritual energy, which when released provides enlightenment. People hold energy as well and, like rocks, are shaped by life events.”  Kabriel uses this juxtaposition of rocks and energy in his work as a metaphor for exploring the relationship between life’s forces, inspiration, and enlightenment.

Many of the pieces in Kabriel’s exhibition, Inspiration Road, begin as an exploration of ideas and images in a sketchbook. From the sketchbook the work is assessed to determine which images will be reworked into larger traditional drawings using subtle chiaroscuro techniques, or which become more dream like images using encaustic wax. Other examples of his work use a combination of different sized canvas panels to create the structure for his oversized paintings.

Betty Sheinbaum
Between the Lines In her latest body of work, Between the Lines, artist Betty Sheinbaum continues to explore the mysteries and challenges of painting.  Feeling there is no right way to create an image, Sheinbaum says the final outcome of her work is always left up to fate.  With an undetermined end goal, she is constantly looking, learning, and imagining new ways to feel fulfilled.  For Sheinbaum, a painting is continually open ended. Always in search of new ideas to put on canvas, Sheinbaum finds inspiration in learning.  "As a constant student eager to see things from a new perspective, my work is never a mission accomplished.”
Posted by Anne M Bray at 12:39 PM No comments:

With a central focus around the color red, this month’s themed show at TAG Gallery, Caught Red Handed!, will highlight many different interpretations of the seductive shade.  Known to represent a variety of emotions, red is the color of passion, igniting feelings of love, lust, revenge, and even rage.  Although the color is warm, red is revitalizing and dangerous, exuding a strong and powerful energy. It excites the emotions and motivates us to take action.  Red signifies a courageous spirit, driving ambition, confidence, and determination.  From celebration to ceremony, blood to wine, the associations are as vast as the color’s spectrum.
Through this exhibition, Caught Red Handed will explore those feelings, portraying the impact the color has played along our artists’ journeys.  From the feminine to the masculine, the positive to the negative, this group show will dive deep into the psychology behind the color red.

TAG invites you to share your red-themed art, here in this Spectrum Share linkup.
Not sure how? Click on "How to add a Saturday Spectrum linkup" above in the menu tabs. 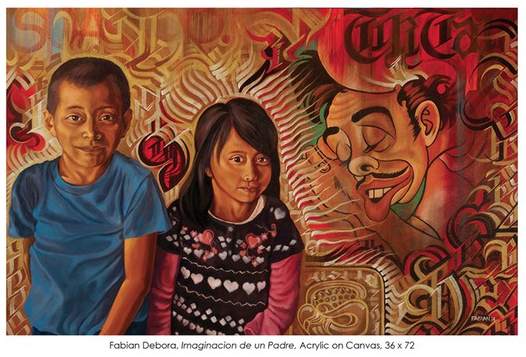 Working in a variety of media, with a goal to speak to viewers from all walks of life, Spiritual Language is the physical translation of struggle, growth, hope, and healing, through artistic expression. Speaking directly to the core of what makes us human, this “language” is an intangible force that pushes past the boundaries of race, social class, cultural barriers, religion, and age. Unifying us through artistic communication, this exhibition provokes honest conversation evoking empathy, understanding, and emotional connectivity.

Presented along with several community art events, this exhibition seeks to unite and engage visitors by showcasing the healing power of art, giving recognition to the mission of Homeboy Industries. As the largest gang intervention program in the nation, Homeboy’s art initiative fosters a sense of hope and possibility for those impacted by a life of poverty and violence. This encouragement of creativity feeds not only the growth of artists, but also the development and cultivation of the spiritual language.

Proceeds from this partnership will directly benefit Homeboy Industries, helping contribute to their creative cause. Visitors to the exhibition can show support of Homeboy Industries through donation of art supplies and materials such as paint, canvas, brushes, etc. made directly at TAG Gallery.

Homeboy Industries
Homeboy Industries provides hope, training, and support to formerly gang-involved and previously incarcerated men and women allowing them to redirect their lives and become contributing members of our community. Each year over 10,000 former gang members from across Los Angeles come through Homeboy Industries’ doors in an effort to make a positive change. They are welcomed into a community of mutual kinship, love, and a wide variety of services ranging from tattoo removal to anger management and parenting classes. Full-time employment is offered for more than 200 men and women at a time through an 18-month program that helps them re identify who they are in the world, offers job training so they can move on from Homeboy Industries and become contributing members of the community.

Fabian Debora
Born in El Paso, Texas and raised in Boyle Heights, California, Fabian Debora has been creating art since childhood. Beginning his art career in 1995 as a member of the East Los Angeles Streetscapers, Fabian was mentored by many Chicano graffiti artists and muralists, introducing him to creative expression in all forms. Over the years Fabian has created murals throughout East Los Angeles and continued to develop his style through work on canvas. He has been showcased in solo and group exhibitions throughout the United States, including Santa Barbara, CA, Los Angeles, CA, and Kansas City, MO. Fabian is currently a substance abuse counselor and art mentor at Homeboy Industries in Los Angeles. Working in collaboration with OTIS College of Design as a liaison between community artists in Boyle Heights and students in the classroom, Fabian continues to use art as a vehicle to communicate, educate, and touch people throughout his journey. By conceptualizing and interpreting his personal experiences as well as the experiences of his community, Fabian believes that he too can effect change.

Father Greg Boyle
Homeboy Industries traces its roots back to 1988 when in an effort to address the escalating problems and unmet needs of gang-involved youth, Fr. Greg and many community members developed positive alternatives, including establishing an elementary school, a day care program and finding legitimate employment for young people. In 1992, as a response to the civil unrest in Los Angeles, Fr. Greg launched the first social enterprise business, Homeboy Bakery. The mission of Homeboy's model of social enterprises, to create an environment that provides training, work experience, and above all, the opportunity for rival gang members to work side by side. The success of the Bakery created the groundwork for additional social enterprise businesses. Today Homeboy Industries’ nonprofit economic development enterprises include Homeboy Bakery, Homeboy Silkscreen & Embroidery, Homeboy/Homegirl Merchandise, Homegirl Café & Catering, Homeboy Farmers Market, and Homeboy Diner at Los Angeles City Hall.

As Executive Director of Homeboy Industries and an acknowledged expert on gangs and intervention approaches, Fr. Boyle is an internationally renowned speaker. He has given commencement addresses at numerous universities, as well as spoken at conferences for teachers, social workers, criminal justice workers and others about the importance of adult attention, guidance and unconditional love in preventing youth from joining gangs. Fr. Greg and several “homies” were featured speakers at the White House Conference on Youth in 2005 at the personal invitation of Mrs. George Bush. In 1998 he was a member of the 10-person California delegation to President Clinton’s Summit on Children in Philadelphia. Fr. Greg is also a consultant to youth service and governmental agencies, policy-makers and employers. Fr. Boyle serves as a member of the National Gang Center Advisory Board (U.S. Department of Justice, Office of Juvenile Justice and Delinquency Prevention). He is also a member of the Advisory Board for the Loyola Law School Center for Juvenile Law and Policy in Los Angeles. Previously, he held an appointment to the California Commission on Juvenile Justice, Crime and Delinquency Prevention.
Posted by Anne M Bray at 7:30 AM No comments: