Go Woon Choi
Everyday Life
Go Woon Choi’s recent body of work is a unique exploration of everyday objects. Her interest in common objects is rooted in her idea that “even common objects can appear strange and fantastic under different light conditions and environments”. Transforming ordinary objects into extraordinary visual experiences, Choi concentrates on the reflection of light and silhouettes of her imagery. Buttons, clips, toys and metal objects in her paintings are depicted in close-up views and compositions that give the objects a new life.

Honing in on minute details, each object is substantially represented while the various, objects are combined into one surreal construction; building a hybrid form of semi-abstraction. The monochromatic colors in the background stresses the silhouette of the whole image, whereas the imagery itself continues to develop beyond the canvas. Subsequently, the changing light on the surface give an impression as if the form is in motion.

“Artists reinterpret the subject of art by imbuing artistic recreation in different elements of our daily life. Our interpretation was not a concept learned in school, but what our eyes have seen and our senses have felt.”

Michael Knight
Superstitious
In his latest body of work, Michael Knight explores the ideas behind our superstitions, myths, and beliefs. Reacting to the world around us in irrational ways seems an easy thing to do. Frightened by that which is unknown and mysterious, we establish belief systems, customs and notions meant to help us cope with and control that which we do not understand; circumstances which we wish to influence.

From our lucky shirts and magic numbers to the avoidance of ladders and black cats we establish rites and rituals to protect us. From whim to obsession, from the scratching of lines on the stone walls of Lascaux to the etched marks depicting the talismans and traditions collected in this exhibit, we hedge our bets seeking safety and good fortune. Meanwhile the laws of nature reveal most of this to be non-sense and fate and chance exert their strong grasp as we struggle to avoid bad luck.

Elyse Wyman
Sign Language
In No Outlet, Elyse Wyman explores the dynamics and interrelationships of female identity, sexuality, gender stereotypes, and self-worth. Wyman’s sculptures illuminate a deeper emotional level generally hidden by the more carefully managed armor we display to the outer world. The transparent forms in her work reveal the female torso as both physical and psychological containers, as well as allegorical muse.

Throughout this new work Wyman fuses separate entities to reveal things we often take for granted. Seemingly ordinary road and warning signs take on new meaning when placed inside the female form. This intersection of disparate elements results in new, sometimes impishly humorous interpretations. Layered with significant objects, paintings, and personal fragments, the torsos expose the female figure to deeper scrutiny, functioning as both object and subject. These visual double entendres demonstrate how context can determine meaning and how meaning changes according to context.
Posted by Anne M Bray at 8:00 AM No comments:

Art Story: Fate is Closer Than it Appears 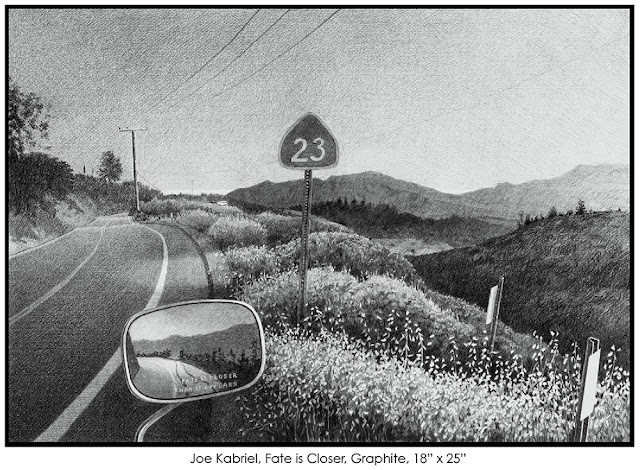 The drawing "Fate is Closer Than it Appears" has serval interesting overtones. The image begins with a road stretching out in front. The road heads down a mountain with its twists and turns moving towards the distant ocean (Route 23 heading toward the PCH). The motor cycle’s rear view mirror in the drawing reflects a road heading in the other direction, back in space. This is a deliberate contrast of past, present and future.
In the reflection, we see on the road a pair of car skid marks. They make the iconic black “S” marks on the surface before going off the road’s edge and disappearing.
On the mirror where it normally reads “objects may be closer than they appear,” is the title of the drawing, "Fate Is Closer Than It Appears," which is my way of expressing - in the turn of an instant, life can change, suddenly and forever. A defining and definitive moment.
My sister, five years ago, at 47 was too drunk to drive. The amount of alcohol in her system was so high enough, she should have died from alcohol poisoning. She was trying to leave a bad marriage and about a mile from her house, she failed to navigate a sharp turn. She went off a curved embankment at a very high rate of speed. The impact severed several trees before the car landed up side down, crushing the inside.
We found some of her personal belongings hundreds of feet from the crash site.
It was a beautiful blue December morning. I was on my way to teach a class but fate had changed everything.
My drawing is an expression of that day.
Joe Kabriel

Meet Joe Kabriel and Betty Sheinbaum this coming Saturday at an Artists' Talk at TAG, 3pm.