For the past six years, Anne M Bray has been designing prints for an intimate apparel company which has led her to re-examine her pattern-based work. In Pattern Recognition II, Bray showcases mixed media monoprints on paper and large canvas banners developed over thirty years ago. The inherent repetitive nature of the silkscreen process forms a structure for multiple overlays of abstract marks. Her scratches and scrawled marks appear almost as if written words, but instead result in a conceptualized language. Combining the forces of quick gesture, spontaneous marks, and patterned lines, Bray's work evokes a sense of both calm and vitality.

Kean's Murmuration depicts the exhilarating, liberating, and often mystifying experience of watching birds flock together in complex loops, figures, spirals, and other choreographies. "Whenever I interpret nature on canvas, I often look up to admire the patterns of cloud and rain in the sky. Sometimes it's the birds I notice, the way in which they fly from place to place during their pre-roosting ritual, growing in strength and numbers with each to and fro," writes Kean. To capture the intricate grace of the flock's aerobatic maneuvers, Kean paints the birds, glazes them over, and repaints. The result: an occasional wing, beak, or tail that stands out amidst the chaos of the flock's fluctuating movements, and an image that questions the mysterious border between perception and understanding.

Painting a portrait is the intimate process of "getting to know you, getting to know all about you." It is a wonderful way to be in touch with a single person. But besides merely painting a portrait, Sheinbaum enjoys watching people: what they do, their relationship to one another and their activities. She watches people's lives through their hearts and souls and translates that to canvas.

Posted by Katherine Kean at 10:30 AM No comments: 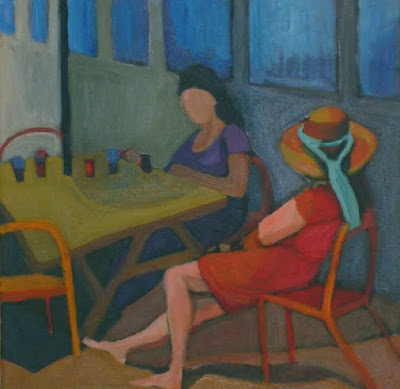 When did you first realize you were an artist (or have the courage to identify yourself as an artist)?

Around 30 years old. I had four children and could start going to art classes. I painted at home in the living room and studied art history.

For whom do you make art? 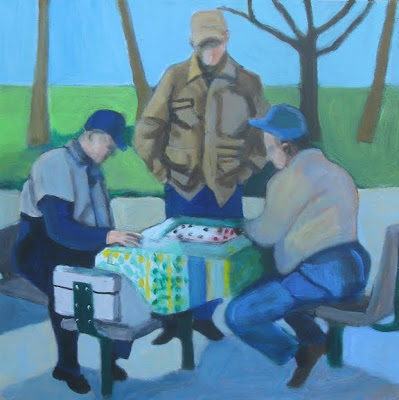 What's new with your work? Have you learned any new techniques, or faced any new challenges this past year or so?

I have been working on drawing and it is interfering with the freedom of painting what I want to express. It is difficult to become adventuresome - I haven't succeeded to my satisfaction.

Do you have a favorite painting? (Yours or somebody else's)

Many. Works by Diebenkorn and Paul Wonner. 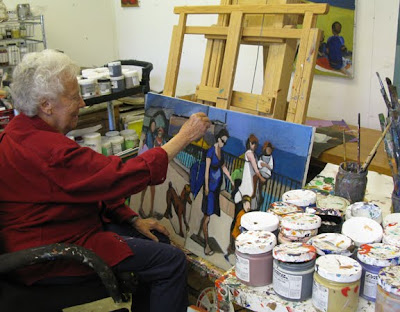