I am in awe of Earth’s primal forces. Their beauty inspires me as a painter -- not as literal objects -- but as experiences and metaphors. Water is the first in a trilogy of art shows I’m planning on earth’s essential elements — Water, Fire and Air.

Ranging from contemplative to ferocious, some images of water provide solace, or celebrate the way water brings life to drought-stricken land; other images suggest the destruction of life in hurricanes and the recent tsunami in Japan. Ultimately the energy of water is connected with the cycle of life -- birth to death. The next two shows in the “Elements” series on Fire and Air will open in 2012 and 2013.

By presenting images of water that inspire wonder or appreciation I also hope to raise consciousness about the social implications of water. At a charity event for The Samburu Project on July 9, Samburu’s founder will show a video about her ongoing efforts to drill water wells in Kenya’s cholera-stricken communities, and people will see how much one well can nurture an entire community and bring it back to health.

Tell us about how this work is different (or the same) as the work you have exhibited at TAG before.

The series I’ve shown at TAG in the past three years explore elemental energies, ethereal landscapes, and our human journey. Each series is a distinct approach, yet they all express a sense of wonder and, taken together, become a meditation on the veil between seen and unseen.

In 2010, I embarked on the new series expressing the vital energies of earth’s elements. These paintings are somewhat more abstract than earlier series, evoking a phenomenon rather than depicting it.

﻿﻿Is there more color? Yes, why? Are you continuing to work on an unstretched linen surface? It looks like there is more form, less abstraction, Do you agree, disagree?

Rich blues -- cerulean, cobalt, ultramarine, phthalo, brilliant, turquoise, prussian and any others that caught my eye – play with bright white inks and acrylics to leap out of solid black grounds in most of this series. That’s not an attempt to be literal (in fact pink seas turns up in a few of the pieces). After several years of blacks and browns, I was ready to be re-energized by color.

I still like unstretched raw linen for its dimension and textures. Unleashing the energies of nature on a tamed perfectly stretched, flat canvas feels inhibiting. To me, nature should be on as natural a surface as possible, even if the resulting work is less than predictable or neat.

Very few of these paintings have representational elements – two have sailboats, one has hands, one has a face and hands, one has a vague figure – but that’s only 5 paintings out of 13 in this show. Most are abstract, far more than in the previous series where landscapes were identifiable. My overall direction is towards abstraction.

How do these paintings come about - what are you thinking as you work?

I try not to think as I work. When it’s going well, I am the paint. Well, actually I’m the human who squirts more heavy gloss medium into a cup of watery white or splashes the canvas with a brush filled with Chinese ink or sprays an acrylic edge with alcohol or chases a drip or stuffs paper towels under the canvas to shape the flow or becomes exasperated and paints out everything black, leaving only the interesting parts. But I don’t know if that’s quite thinking, more like animal instinct. I do think critically about each painting afterwards, in the editing and finishing process. And in the two figurative works, Water Blessing 1 and 2, I planned the image completely in advance because I had something specific to convey about the preciousness of water to people. But for this series, that kind of analytic thinking has been more rare than in the two earlier TAG series, many of which were drawn before I began painting.

﻿
﻿ What about your work is most satisfying?

Being amazed. Some of these works are quite large, and I make them flat on a big table outdoors. Since they’re sopping wet for a long time – three days in the case of thick textures layered with slow-drying medium – I’m not entirely certain what the effect will be when the piece is brought indoors and stood on an easel. That begins a process of refinement, returning the painting to the outside table or working on an easel, but with this series I’ve been delighted how many of them turned out.

Red! Orange! Yellow! “The Life of Fire” in all its symbolic and energizing permutations. That will be my 2012 show. As a continuation of “The Elements” series, I expect to keep using unstretched raw linen, probably again with images emerging from black. But we’ll see where the paint takes me. 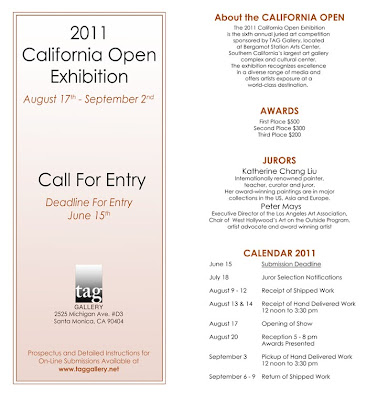 Small Pleasures
Anne M. Bray
The pen and colored pencil drawings in Bray’s most recent exhibition Small Pleasures: Sketches from Everyday Life focus on the contemplative aspects of two everyday objects: cupcakes and paint tubes. Although these two series began as visual journal entries, they quickly developed into formal investigations of form. The sketches, inspired by her insatiable sweet tooth and her longing to paint which is precluded by her current living situation, showcase quiet moments of sitting still and closely observing things at hand. Looking to Wayne Thiebaud’s iconic paintings of desserts, Bray features one object in isolation. The small scale of both the cupcakes and paint tubes draws in the viewer for an intimate look.

New Work
Patricia Doede Klowden
In her ceramic figures that make up New Work, Patrica Doede Klowden’s new exhibit of ceramics and pastels at the TAG Gallery, Klowden investigates the tactile, alluring forms of various fabrics on female figures. These headless bodies are clothed in high fashion dresses of lace, gingham and silk. Klowden’s pastels play with her continuing love of deep color and the hybrid of real bodies and imagined landscapes.

The Food Series
Gary Polonsky
Breaking from the flat surface of traditional painting, Gary Polonsky brings 3D painting to a new level of depth and focus in the food series. After working on traditional stretched canvas for most of his career, Polonsky began an exploration of non-traditional canvases, eventually combining Balsawood, Styrofoam and wire-mesh to create larger-than-life wall-based constructions. In the leaf series, he monumentalized autumn leaves, bringing our attention to their forms, patterns and textures. Now, in the food series, he celebrates popular American foodstuffs, enlarging them to the point where we must confront them in all of their processed glory.
Posted by TAG Gallery at 9:59 AM No comments: 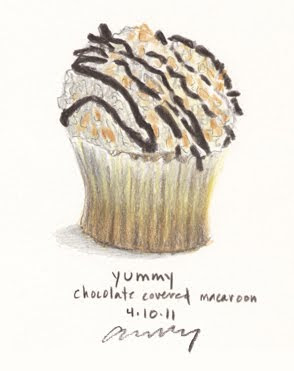 How is the work in this exhibition different from your last exhibition? Also, what does it have in common – if anything?

My last exhibition, Road Work, was of my roadscape pastels - the big open highway. This is a more intimate show: 5 x 5" drawings in pen and prismacolor pencil. I think the only thing they have in common is me.

Is your working method the same for both? What’s different? (i.e. working directly or with reference photos?)

Again, very different approaches to the work. I use photo reference for the roadscapes (see process described here). These sketches are drawn from life.

I see that you keep several bodies of work going at the same time. What goes into deciding, on any given day, which to work on? Why?

Yes, I get easily bored working on only one thing and juggle a variety of projects. Once I start seeing a series develop, I'll get focused on that one theme and go deeper with it. Some will fizzle out, but may pique my interest years later. The yearly TAG shows give me concrete deadlines and help spur me into getting a body of work done.

What attracts you to the objects you sketch as subject matter?

I started this latest burst of sketching in May 2008. I was inspired by Danny Gregory, author of Everyday Matters. In it, he explains how sketching the everyday things of life (and sketching every day) can help one better connect with the world. And ever since my student days at OTIS, I've been envious of artists that maintain visual journals. So I have been trying to keep at it.

I've been working on a bunch of themed sketch journals, from a monthy series instigated by ArtHouse, a collective based in Brooklyn. I completed "mini" (tiny objects I found around the house). In progress are "In these shoes" (shoes) and "incoming!!!" (a day in my life through cropped objects).
The drawings I’ve seen, on your blog, for example, seem like a visual journal, telling the details of your day to day life. Is this what they are meant to do?

Sometimes the objects scream out to be sketched, such as the cupcake on the Magnolia pastry box: 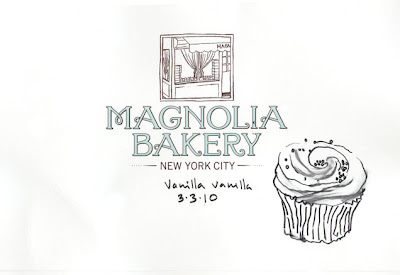 
Other times I've used the Weekly Challenge list generated by the Everyday Matters Group (I do well with assignments).
I’ve seen a lot of drawings of paint tubes and food - interesting combination - can you comment on that? (yummy paint and icing?)

My choice of exhibiting paint tubes and cupcakes came from having more sketches of those two subjects than anything else.

The first paint tube sketch derived from the Weekly Challenge list "#180 - Draw something in your favorite color." I thought of my cadmium colors and the orange tube was the most squished. 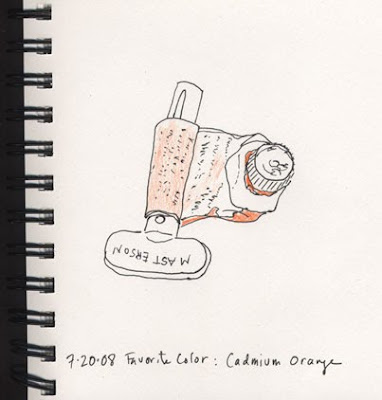 I had such fun rendering the tube's contorted shape, I decided to do the rest of my palette. I also came to realize I liked the tubes better with the caps off. 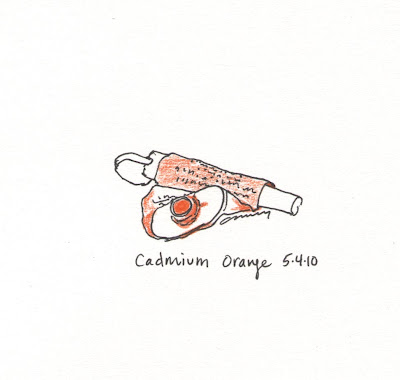 The subject of cupcakes evolved out of a dessert project started in 2004. I experimented with media a bit before settling on prismacolor pencils. In both sets, the composition of one isolated iconic object is directly inspired by Wayne Thiebaud's dessert paintings, which I greatly admire.
I've had a lot of fun doing these drawings (eating the cupcake models wasn't too painful either). It is very liberating to do quickie sketches that don't require a lot of set-up or messy materials. I highly reccomend grabbing a sketchbook and a pen or pencil and giving it a go. 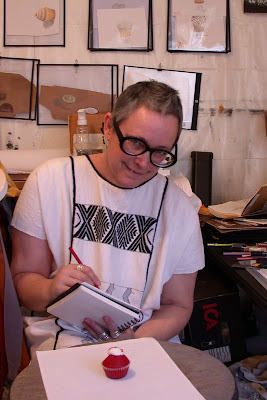