An Interview With Joan Ransohoff 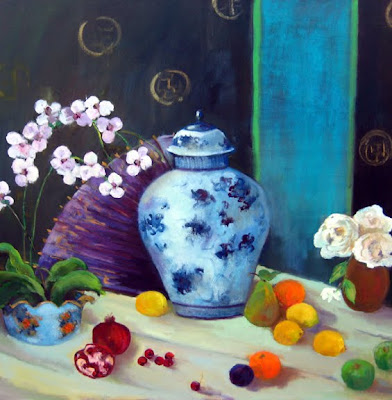 
Joan Ransohoff's artwork is dedicated to capturing the many moods, colors and compositions of nature.

How long have you been an artist?

I’m always reluctant to say – it took a lot of years to even call myself an artist. It wasn’t a moniker or name that I took casually. So it wasn’t until I actually started selling work – that was a kind of validation – that I felt I earned the title. I guess I always wanted to be an artist – I remember drawing and wanting to create as a child. But I do recall the moment when I decided I wanted to be an artist: I was 30 years old. I had gone to an art show downtown at the convention center. I watched an art demonstration in which a woman did an entire painting with a palette knife. I was by myself and I remember watching her and thinking to myself, I’m not sure I want to paint with a palette knife, but I want to do this. I want to explore this process. From that point on I became very involved with the California Art Club, which was my real introduction to representational painting and painting in the style I ultimately paint in today. That was about 1984.

Are your family and friends supportive of your art?

Yes. Very much. I think it took my husband awhile to believe that to take my painting seriously I had to ratch up the time invested. So when I initially began painting a few hours a day, he viewed it like golf, a hobby. But then it quickly merged into something more serious. I was taking part in groups shows and exhibitions. I’d go off to Scottsdale art workshops during the winter months and he would say, “I don’t care where you go, just pick a place near a golf course.” So I tried to integrate our interests for awhile. My daughter was entering high school and my son in sixth grade when I started painting. And my husband had four children of his own. My biggest challenge was having the courage to say: "Here’s what I need from you. I’m really serious about my art and I need your full and total support." And they did and still do. My husband is my biggest fan.

Where do you your find inspiration for your work?

I love painting outdoors and living in California; we have such an unbelievable paradise all around us – I find inspiration just driving down Sunset Boulevard to the beach, driving downtown or driving over to the valley. I am so distracted by the views. Just the other day, I was driving down Santa Monica Boulevard and because of the rains, there was so much snow in the mountains beyond Hollywood in the San Gabriels . It was incredible.

I also go out on a mission to visit museums and galleries to see the latest art. I just went to the FADA Show at the Los Angeles Convention center. I’m constantly investigating the art scene and just being at Bergamot is fun and seeing what other galleries are exhibiting – it’s different, very cutting edge, contemporary.

If I’m painting outdoors, I have a simplified palette, restricted to about 10 or 12 colors. It’s easier to navigate with a limited palette and the emphasis is on the blues, greens and yellows. In the studio I might use twice that amount, 20 to 24 colrs, especially if I’m doing a large piece. When I was new I took a workshop with Kevin MacPherson, and we spent one whole week just color mixing. He works with a very limited palette and it was a great exercise. However, the next time I was in an art store and saw this tube of Delft blue paint, I bought it. I felt it was cheating but it was such rich, pure color.

If you had a few galleries to visit in your area which ones would you choose?

Which historical artists have most influenced your work - and which living contemporary mentors and teachers do you respond to?

One of the periods of art I respond to is the Barbizon School, in which so many of the artists were luminists, a style of painting I really admire and would like to pursue that feeling in my landscapes. It‟s something I‟m attracted to rather than influenced by. In terms of influence: Pissarro, Monet, Cezanne, many of the European impressionists. Then there are the American artists such as Percy Gray, Guy Rose, Elmer and Marion Wachtel, Edgar Payne and William Wendt.

Karl Dempwolf took us on an excursion to Malibu Creek State Park a couple of years ago. We all planted our easels and he said, “Now look straight ahead. William Wendt painted that mountain and your mission today is to paint that mountain. Let’s try and channel the spirit of William Wendt.” I’ll never forget it. The California impressionists had a big impact on me and I’m really inspired by their work. 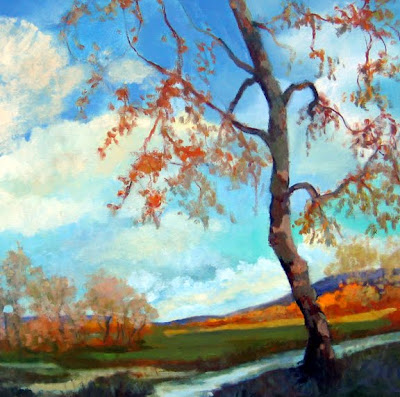 I never went to art school and I’m not classically trained. When you take up painting in your middle years, you have to start out with the best teachers so as to benefit from their academic training in color, design, perspective, texture, paint application – the elements you need to know to paint. My first teachers were Ray Roberts and John Budicin, both skilled landscape artists and gifted teachers. I found a common thread that connected their teaching and painting philosophies. Sharon Burkett Kaiser, originally a still life painter, taught Friday classes in Malibu and I studied with Karl Dempwolf who taught me that trees are never straight. Ralph Oberg was wonderful – and I must say I had a baptism of fire with a Russian painter-- I’ll say no more. 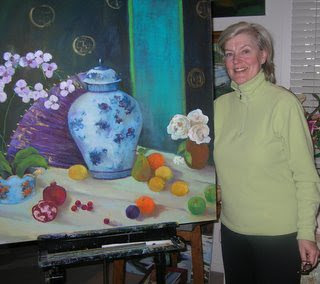