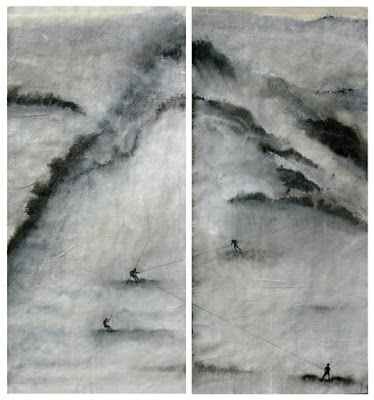 Pam Douglas is a Los Angeles artist who works on raw linen using a stain process that allows for the unexpected.

How long have you been an artist?

That’s a more complex question than you may think because I stopped painting for 20 years just as I was finding my artistic “voice.”

But back to the beginning -- as a child, my art form was writing, so I didn’t have much visual art in my experience until I went to college. I was still just a teenager when I took a studio art class and my world opened up. I virtually moved into the art studio at Vassar, and I never wanted to leave it after that.

Then I went on to graduate school in art at Columbia in New York. My basic art education was very traditional, a lot of emphasis on materials and skills and a strong grounding in Western art history. But later I took off into what became a life-long interest in Asian art. I took some classes in ancient Chinese and Japanese painting and sculpture at Cornell, where they had an excellent department. Even back then, something in me responded to the Zen Masters of the first millennium. To them, the notion of painting wasn’t so much about what was on the canvas, but what was not on the canvas. Their idea had much to do with instinct. They were working with wet mediums, which you really cannot manipulate that much. The idea of layers of thick paint was alien to them. Probably you can see the influence of that in my most recent work.

The rest of the story is that after all of that background and loving that kind of thing, I found out that I could not make a living as an artist. So I had better doggone well do something else. I had always had talent as a writer so I went into screenwriting. For 20 years I put aside all of my artwork. I did not paint at all because I couldn’t do a little bit of it. Either I had to really care about it and do it or not touch it.

And then my life changed. In 2005 I had very serious back surgery, and I was unable to drive or work, even walk, for many months. During that time, painting was what got me up in the morning. When I was thinking of the painting I wasn’t thinking of what hurt. That’s when I started to come back to life. At first, returning to painting after a 20-year lapse was like getting back on a bicycle. You don’t forget how to ride it, but you’re a little wobbly at first. My technique took the better part of a year to come back. Now here’s the amazing realization: When I look at my current work and look at work from when I was 17 and 18, it’s seamless. Back then I was working with the stain technique, with raw linen. It’s almost as if those 20 years did not exist at all.

Currently, I use raw linen, which isn’t sealed in any way. It’s actually a piece of cloth. The Sepia Series was on specially made stretchers, so it was tight, which made it look more like a normal painting. In this new series, I took it off the stretchers altogether so it’s just a soft cloth rippling down from a piece of wood at the top. It gives me a surface that’s not flat. It was very, very challenging. It does wrinkle up, it dries oddly, it shrinks. It shrinks unevenly sometimes. I was in a way fighting the material the whole time. But this gave me some interesting textures. In both the Sepia Series and the new Seekers Series I used acrylic heavily watered, and with lots of medium -- using acrylic as watercolor basically. I also draw on the canvas with inks and charcoal. The liquids move into each other in interesting ways, but the result is not random. I work from measurements and under-paintings and drawings on most of them.

Do you have an idea in mind when you start?

I usually do and sometimes I actually even draw it first. But I am frequently overruled by the paint. Some of the paintings are a “joint venture” between the materials and me. With Follow the River, I had a problem with that canvas -- it had a manufacturing crease, and I couldn’t iron out the fold. I wetted it, I tried everything, but I didn’t want to throw away the canvas. So I used the line as a pictorial element and as soon as I did that the mountains opened up. 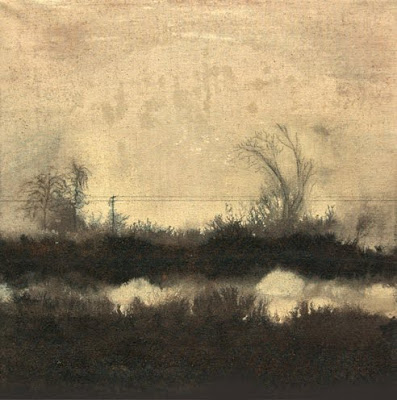 Who do you make art for?

The first answer that came to my mind was God, or Universal Spirit or Life Force.

I also only marginally make it for myself. I appreciate when other artists respond to the work, but honestly it is really an expression of a meditative, or yogic, or spiritual practice.

In that sense, I’m delighted to have sales, but that’s not my purpose.

I had worked with a lot of color, just before the Sepia Series. I love color. I had simply reached the end of what I could say with color at that time. I was reaching for a purity of statement in that series. I really wanted to get away from anything garish or in your face. I was coming out of a time of being very sick, of looking for peace more than anything else, and I wanted the paintings to be serene, and color just felt wrong at that time. Once I started working with the Sepia Series I realized that there was a lot of color, that there are many shades of brown, many shades of white, and even shades of black. I realized that this is much richer than I initially thought. In the new Seekers Series the palette started going further into blacks and whites. But as I reached the end of it I started introducing more color and I think my next series will have more color.

What excites you about painting?

Discovery, I think discovery. When you have an idea and you get an initial little thrill of what’s in your mind, about what it could be. And then when you’re doing it, the painting actually changes and it grows. Sometimes what you initially thought was going to work, won’t work, but something else will. And that’s exciting. There are times when some of these that should have been done quickly took a very, very, long time. I learned you couldn’t make them follow your original idea; you really need to let them be what they need to be.

What is the hardest thing about being an artist?

Ah well, the first answer that comes to mind is money. The costs of the materials themselves. Forget even your personal work time. The actual physical materials mount up. And people don’t realize that what they are paying to the artist barely covers the cost of their supplies, and then when you also add that you’re doing what it takes to put on a show and giving a commission to the gallery, there’s very little, if any, profit to the artist. And that’s not even counting compensation for time.

Do you have a favorite painting, either yours or somebody else’s?

I have some that I like best among my own of course, but I’d go back to big influences. When I was a young teenager, I used to take the subway to the Museum of Modern Art in New York and look at their permanent collection, especially the Abstract Expressionists. I was impressed by Robert Motherwell. He worked entirely in black and white, and I respond to the underlying rhythm of the black and white to this day. I also loved the Flemish painters when I studied them; Vermeer and Rembrandt. Beyond that I would have to go to the ancient Chinese and Japanese work, the floating world. Among the first millennium Chinese painters, I don’t know if I would pick out one. If I’m looking for inspiration, wondering what the next painting will be, I have these books, they’re not even good books, they’re 3” x 3” and I’ll just flip through them to bring myself back, to recalibrate myself back to what is wonderful. 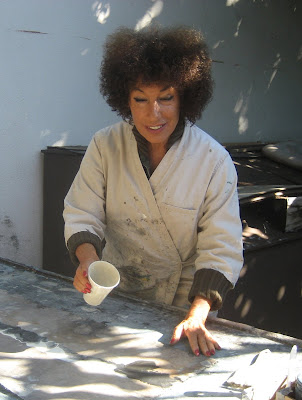