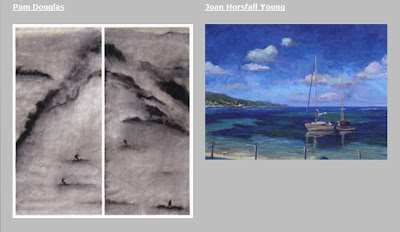 TAG Gallery is pleased to present:
“The Seekers Series” by Pam Douglas and “Caught in Time” by Joan Horsfall Young
February 2 through 27, 2010
Artists Reception: Saturday, February 6 from 5 to 8 pm
Artists Talk: Thursday, February 25 from 6 to 8 pm

In this new work, raw linen, freed from its stretchers, is allowed to ripple with its textures. Using charcoal and water media in a limited palette, mountain-scapes are punctuated by subtle figures and geometries to suggest order amidst wilderness, an underlying balance in the universe. Douglas says this series is influenced by her respect for Zen artists of the first millennium who believed in using their instincts more than their brush and for whom paintings were poetry.

Douglas's recent shows include the Los Angeles County Museum of Art (LACMA) Sales and Rental Gallery in 2009. In 2008, she won juried exhibits at TarFest, i-5 Gallery at the Brewery Art Complex, and The California Open at TAG. In 2007, she had a solo show at the James Gray Gallery. Her paintings are in many private collections and appear in a Battlestar Galactica documentary as part of an actor’s collection.

In this series, Joan Horsfall Young has captured timeless images in order to prolong the fleeting moment of the subject matter’s existence: boats at anchor, flowers in bloom or a child sleeping. All to soon, however, the boat will be back at sea, the flowers will fade and the child will awaken. Her work is a reminder to “seize the moment”. Enjoy the subtleties and precariousness of the moment’s creation.

Young maintains that everything has been painted before, but each time we encounter an artifact in our universe, there is reason to repaint it, this time in its new time and place, and with a new spin. It is about discarding and rearranging the material. Using soft buttery paint and loose brushwork she molds the form based on an armature of good drawing. “As if attending a great pot of soup, we artists just dip into it but have no real claim to it. We need only to be thankful the soup is available” Lévi-Strauss.

Young is an Artist Member of the California Art Club and the Oil Painters of America. Her work has been shown in numerous museums both in the United States and Canada. Her collectors are throughout the world. Along with Landscape and Still Life painting, she also has painted Canadian, and American Military and did a show on West Point.